A. Ceiling systems are built to meet certain hourly fire ratings, of which part of the ceiling are usually made of fire-rated board to avoid flame spreading in the event of fire.
B. When a recessed light / downlight is installed, the ceiling cut out hole void the fire rating of the structure.
C. In order to maintain the fire-rated function, downlights in such fire-rated system should be required to be fire-rated as well.
D. When it comes to the fire event, the fire-rated downlights can buy some more minutes for people in the construction, which could be difference between life and death. 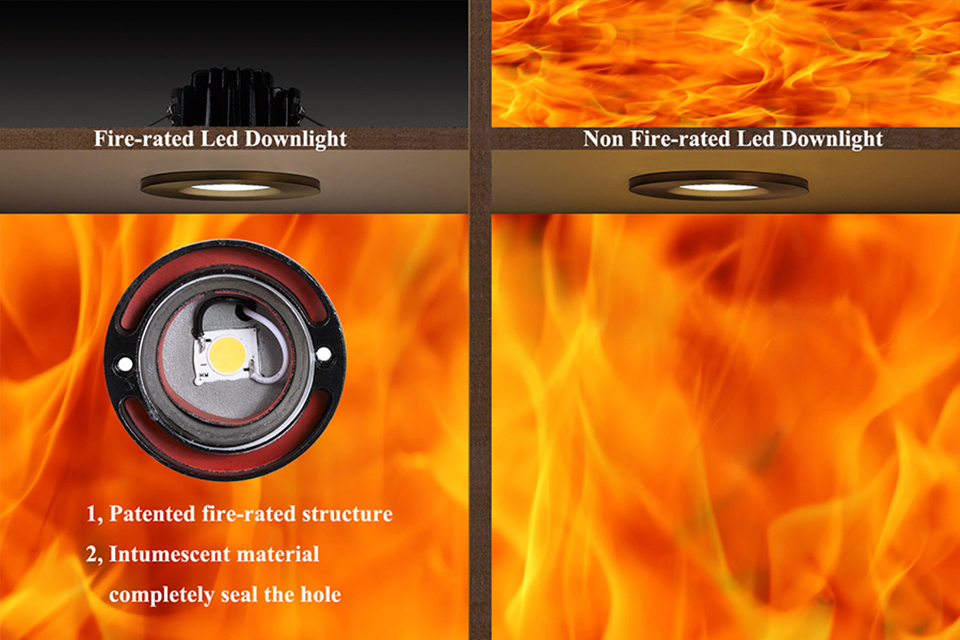 One Percent’s fire-rated downlights are designed to achieve the fire-rated function with the special patented design.
A. Intumescent material are added to automatically seal the ventilation hole and stop the fire from expanding. In the event of fire, and when the heat temperature is up to about 180℃, the intumescent material will expand and form a dense carbonn char that the fire cannot go through.
B. Besides shutting off the ventilation hole, the expanded intumescent material will protect the radiator from melting, and no fire can spread from the recessed light.


A specimen of a loadbearing timber floor assembly, protected by a plasterboard ceiling incorporating eighteen downlighter light fittings has been subjected to a fire resistance test in accordance with BS476: Part21: 1987, Clause 7. The evaluation of the assembly against the requirements of BS476: Part21: 1987, Clause 7 showed that it satisfied the requirements the periods stated below:

*The test duration. The test was discontinued after a period of 102 minutes.

*The duration of fire test will be a minimum of 75 minutes.